Nepal, home to many temples is famous for its ancient heritage. People following different types of religion are found here. These people have their temples, stupas, mosque, and church that they visit. Therefore,  Nepal is a secular country today, it was a Hindu country before and followed different Gods and Goddesses. In devotion to God, they built different types of temples and worshipped them. These monuments today have great importance.

Throughout the traveling experience, you will get to enjoy the following places in this Nepal Tours 7 nights 8 days. 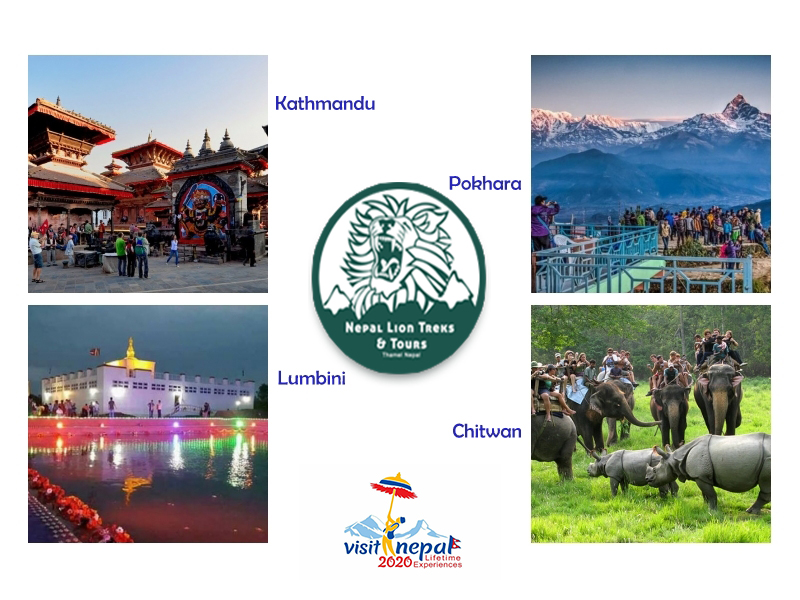 The ancient trade route between India and Tibet that passed through Kathmandu enabled a fusion of artistic and architectural traditions from other cultures to be amalgamated with local art and architecture. The monuments of Kathmandu City have been influenced over the centuries by Hindu and Buddhist religious practices. However,  The architectural treasure of the Kathmandu valley has been categorized under the well-known seven groups of heritage monuments and buildings. In 2006 UNESCO declared these seven groups of monuments as a World Heritage Site (WHS). The seven monument zones cover an area of 189 hectares (470 acres), with the buffer zone extending to 2,394 hectares (5,920 acres). The Seven Monument Zones (Mzs) inscribed originally in 1979 and with a minor modification in 2006 are Durbar Squares of Hanuman Dhoka, Patan, and Bhaktapur, Hindu temples of Pashupatinath and Changunarayan, the Buddhist stupas of Swayambhu and Boudhanath.

Pokhara is a metropolitan city in Nepal. It is the country’s second-largest city in terms of population after the capital Kathmandu since Pokhara and Lekhnath were merged to create Pokhara Metropolitan City in May 2017. After that,  It is the provincial capital of Gandaki Pradesh and the headquarters of the Kaski District. Pokhara is located 200 kilometers (120 miles) west of the capital Kathmandu. Similarly,  The altitude varies from 827 meters (2,713 feet) in the southern part to 1,740 meters (5,710 feet) in the north. Moreover,  The Annapurna Range with three of the ten highest mountains in the world — Dhaulagiri, Annapurna I, and Manaslu — is within 15–35 mi (24–56 km) of the valley.

As a point tourist destination, you can visit places like

Chitwan is a beautiful ecosystem that hosts all kinds of birds, animals, reptiles, and plants. The biggest highlights are the Asian one-horn rhinoceros and hundreds of Royal Bengal tigers. Therefore, The creeping vines and gigantic trees of this beautiful park transport you to a lost world, a world where crocodiles, deer, elephants, rhinos, and pythons run free. Perhaps more important to your Chitwan experience is the presence of the colorful Tharu Culture, a unique tribe known for its ancient culture and ways of living.

In addition, Some of the top things to do in Chitwan include elephant safaris, canoe rides, jeep drives, jungle walks, and more. Choosing this Chitwan tour gives you access to some of the most experienced guides, who have vast experience in the field of hospitality and are known for their great standards of service.

You can enjoy the following destinations

Lumbini is the place where Queen Mayadevi gave birth to Siddhartha Gautama, who as the Buddha Gautama founded the Buddhist tradition. The Buddha lived between roughly 563 and 483 BCE.  However,  Lumbini is one of the four magnets of the pilgrimage that sprang up in places before the life of the Buddha; the others are at Kushinagar, Bodh Gaya, and Sarnath. In other words,  You can do some sightseeing in the Lumbini garden & various monasteries that are scattered around the area. Overnight accommodation will be in a hotel in Lumbini.

Lumbini consists of one of the following famous points

In conclusion, These amazing destinations and all included in this package- “Nepal Tours 7 nights 8 days”. So why wait, just book your trip and move on to the road of the journey with Nepal Lion Treks & Tours and allow us to serve you.

Kathmandu Valley has been covered by mountains so it is called a valley. It is situated 400 ft. above sea level and the valley has presented as a combination of the heritage and fundamental site itself. We find many heritages and historical and natural places in Kathmandu Valley; seven sights have been listed as World heritage sites.

There are three main cities in Kathmandu valley; Kathmandu, Bhaktapur, and Patan (Lalitpur). Kathmandu city is the capital of Nepal. Bhaktapur and Patan have situated nearby Kathmandu city. All cities are very beautiful and rich in the view of heritage sites, historical sites, cultures, locality, and natural scenery. Kathmandu valley tour covers sightseeing in major places of the cities and culture and nature tours in and around Kathmandu Valley.

Visit David Water Fall, Shiva Cave/ Word Peace Pagoda Sun Set tour/ Walk around Lake Side Street. You have three places for sightseeing Tibetan refugee camp, Devi’s Fall, and Gupteswor cave. Pokhara is a beautiful tourist place where you can enjoy seeing lakes and mountains, you can enjoy the ambiance of Pokhara in the natural setting with the towering Himalayas as the backdrop. Visit Devi’s Fall and Tibetan Refugee Camp. Explore Phewa lakeside market. Phewa lake boating in the evening to catch the reflection of the Himalayas on the Phewa Lake.

Sunrise tour of Sarangkot with Himalayan vista/ Visit to Bindavashini temple & Seti river gorge/ 1 hr boating with Barahi Temple/ Free time & walk around Lake Side Street market. Sarangkot is the most popular tourist destination from where the tourists can enjoy the great view of the Pokhara Valley and the magnificent view of the mountains such as Annapurna Massif, Fishtail Mountain, Dhaulagiri range, and Manaslu.

Today early morning breakfast we drive to Chitwan, 150 kilometers from Kathmandu, which takes around 5 hours. We journey along the winding road on the banks of the Trishuli River. After checking in to the hotel lodge and getting refreshed we are briefed about the full nature programs by our nature guide.

Today there is a guided village walk and a walk on the banks of the Rapti River to watch the charming sunset views in the sub-tropical jungle. In the evening, a dinner and cultural program by ethnic tribal people is arranged with a stick dance and tribal drums. Overnight at Chitwan. Included all meals.

The Chitwan National Park has been declared by UNESCO a World Heritage Site. Today you will discover why the National Park holds such an important place in preserving the wildlife of Nepal. A chance to ride elephants and even bathe with them. There are many wild mammals here. The Park is home to rhinoceros, tigers, leopards, sloth bears, wild bison, over 500 bird species, butterflies, as well as the near extinct Gharials crocodiles.

You do several activities during your stay – an elephant safari, a nature walk, bird watching, a jungle drive, a canoe trip, and others. You may even take a bath with an elephant and learn how to wash your elephant! Don’t forget to take a video of your elephant bath which will be one of the fondest memories of your lifetime. Overnight at Chitwan.

Your journey in Nepal comes to an end today your guide along with one of our representatives will be with you when you transfer to the airport for your onward flight. A fond farewell from us, with a sincere wish to meet you again.